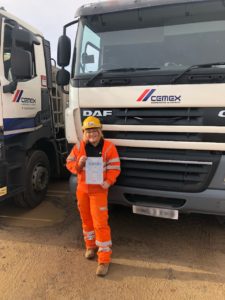 A former student of North Kesteven Academy near Lincoln has been named Apprentice of the Year in the tipper industry after choosing her career as an HGV tipper driver.

Emily Luff (19), the first female tipper driver apprentice for CEMEX UK, a leading supplier of building materials, is paving the way for young women and breaking down the barriers of traditional employment.

Emily, who lives in Skellingthorpe, passed her HGV test first time and is fast becoming an ambassador for encouraging more women into the sector. She left North Kesteven Academy in 2015.

She received her award at the Tip-ex Tank-ex Awards in Harrogate for individuals and businesses that shape the tipper and tanker industries.

The awards took place on the 1st June, when 500 representatives from tipper, tanker and haulage trades came to celebrate the 2018 winners.

Emily was thrilled to have won the award and have her hard work and determination recognised by the industry. She said: “I was delighted to be named Apprentice of the Year.  It came as a shock to me as I didn’t really expect to get it.  I hope it shows other women that we can beat stereotypes and do jobs that women aren’t seen to do.”

Neil Wilkinson-McKie, Headteacher at North Kesteven Academy, said, “We are so proud of Emily and her achievement; she’s a true role model for female students to aspire to and we’re certain that this success won’t be her last!

“We always wish the best for the students who pass through North Kesteven Academy and Emily has set a great example to all current students to follow in her footsteps.”

Carl Milton, who oversees the CEMEX UK HGV Driver Apprentice Scheme, commented: “It was a great achievement for Emily and all this year’s apprentices, great recognition for the work and commitment going into to develop young people and talent in the company.”